All articles are written by graduate students and postdocs of the institute. Get to know them through the following small profiles! 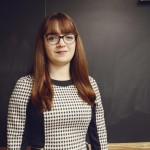 Sylvia recently graduated from Penn State with a BS in Physics and a BA in Spanish, conducting research with Prof. Mostafa on ultra high energy cosmic rays and on gravitational waves with Prof. Hanna's group. Her honors thesis focused on using data from the Pierre Auger Observatory to determine the mass composition of the highest energy particles in the universe. She has also conducted research with LIGO, using the search for a stochastic gravitational wave background to test General Relativity. She will continue her studies of gravitational waves through a Fulbright Postgraduate Scholarship at Monash University in Australia and will then return to the US to complete her PhD in Physics at the Massachusetts Institute of Technology. View all posts by Andrea Sylvia

Anne-Sylvie Deutsch is a graduate student and works with Prof. Shandera on inflation and early universe cosmology. She studied for a Bachelor Degree in Physics at Université Catholique de Louvain in Belgium, and continued at the same university to complete a Master Degree in Particle Physics and Cosmology. During that time, she spent four months at the Laboratoire AstroParticules et Cosmologie in Paris, and wrote her master thesis Polarization of the Cosmic Microwave Background: E and B Modes Separation under the advising of Dr. Bucher and Prof. Ringeval. She then left her home country for another Master Degree in Quantum Field and Fundamental Forces at Imperial College London, where she wrote her second master thesis Effective Field Theories for Inflation under the supervision of Prof. Contaldi. In 2013, she came to Penn State to start her PhD program. She currently works on how the fact that we only have access to a finite range of distance (or modes) can affect the observed statistics of our universe in the context of inflation, and the bias it can induce on the determination of the parameters of the underlying particle physics. View all posts by Anne-Sylvie Deutsch

Aruna is a graduate student in the IGC who studies the very early beginnings and ultimate fate of the universe to understand their impact on current observations. Specifically, she is interested in the implications of a positive cosmological constant for asymptotic structure of spacetime and observations of gravitational waves, emergence of classical behaviour from a quantum theory during inflation. She was inspired to study GR and cosmology during her time as an undergraduate at BITS - Pilani and visitor at RRI - Bangalore and TIFR -Mumbai. View all posts by Aruna Kesavan

Béatrice Bonga is a graduate student at IGC, who loves to learn about gravitational waves, cosmology, quantum gravity and anything that is related to this. After obtaining her BSc in Physics and a BA in Psychology from Utrecht University in the Netherlands, she realized that she was truly passionate about physics and went on to earn her master’s degree in Theoretical Physics (also at Utrecht University). Together with her advisor Prof. Ashtekar and fellow grad student Aruna Kesavan, she studies the influence of the cosmological constant on gravitational waves. She also works on quantum gravity phenomenology by studying the effects of loop quantum gravity on the cosmic microwave background. If she isn’t at the institute, you will be likely to find her doing Zumba, yoga, brewing beer or having a tea with friends. View all posts by Beatrice Bonga

Brajesh Gupt is a postdoctoral fellow at IGC. His current research interest lies in understanding the very early stages of our Universe and studying its relation to current observation using the techniques of loop quantum gravity. His research interest extends to inflationary paradigm and CMB anomalies. Brajesh was born in Deoria, a small town in the eastern part of the state of Uttar Pradesh, India and earned bachelor’s degree in electronics and communication engineering from Birla Institute of Technology Mesra, Ranchi, India in June 2009. He then enrolled in the doctoral degree program in the physics and astronomy department at the Louisiana State University and joined IGC in August 2014. When not thinking about the mysteries of the Universe, Brajesh likes to travel, read, write, cook, and listen to music. View all posts by Brajesh Gupt

Foteini is a postdoctoral researcher, and Fellow of the Institute of Gravitation and the Cosmos, in the Particle Astrophysics group. Her research is in the field of particle astrophysics, specifically the phenomenology of ultra-high energy cosmic rays, astrophysical neutrinos, and gamma-rays. She is interested in unravelling the physical processes that take place in the most extreme astrophysical environments, primarily gamma-ray emitting blazars. Foteini completed her undergraduate studies and PhD at University College London. Since 2014, she has been a member of the Pierre Auger Collaboration. The Pierre Auger Observatory in Argentina is the world’s largest cosmic ray observatory. She is also a member of the Astrophysical Multi-messenger Observatory Network (AMON) team. AMON looks for temporal and spatial coincidences between signals from all known astronomical messengers- photons, neutrinos, cosmic rays, and gravitational waves. When not thinking about the non-thermal Universe, Foteini enjoys dancing, doing yoga, reading, and travelling. View all posts by Foteini Oikonomou

Javier Olmedo is a physicist carrying out research in fundamental aspects of field theories, especially general relativity. He obtained his PhD from Complutense University of Madrid, while carrying out his research in the Spanish Research Council (Spain) under the supervision of Dr. Mena Marugán. His interests include quantum field theory in cosmological spacetimes, cosmological perturbation theory for inflationary scenarios, loop quantum cosmology and its potential imprints in the cosmic microwave background, and the quantization of spherically symmetric spacetimes. His postdoctoral experience started at the University of the Republic (Uruguay) and continued in the Louisiana State University (US). At present he is a postdoc at IGC. View all posts by Javier Olmedo

Kelly is a third-year graduate student in the HAWC group at Penn State, working with Professor Miguel Mostafa on gamma-ray energy estimation techniques. Previously, she received bachelor's degrees in both physics and astronomy from the University of Massachusetts Amherst in 2013. While she was there, she did undergraduate research with the EXO Collaboration in the search for neutrinoless double-beta decay. In her spare time, Kelly serves as President of Penn State’s Physics and Astronomy for Women group (PAW). View all posts by Kelly Malone

Lucas is a graduate student at the Center for Fundamental Theory and has done research in Mathematical Physics with applications in high energy physics and quantum gravity. Currently, he works on various aspects of entanglement entropy including loop quantum gravity and chaotic quantum systems. After his undergraduate studies in physics & mathematics in Kaiserslautern/Germany and Berlin/Germany, he did his Masters at the Perimeter Institute for Theoretical Physics in Waterloo/Canada. Before joining Penn State in fall 2013, he worked for six months at the African Institute for Mathematical Sciences (AIMS) in Senegal and interned with the Global Public Policy Institute (GPPi) in Berlin/Germany focusing on international development policy. Beside his strong interest in mathematical physics, he enjoys learning more about public policy and has been involved in several media projects combining print, video and web (including this blog). He is currently the APS FGSA delegate in the AAAS Science & Human Rights Coalition. View all posts by Lucas Hackl

Miguel Fernandez, a dual citizen of México and the United States, is a current graduate student at Pennsylvania State University. He attended Truman State University in Missouri for his undergraduate studies, during which he worked on projects ranging from observational astronomy to materials science to mathematics and geometry research. It was during the latter project that he simultaneously realized his desire to communicate science effectively and the elegance of the differential geometric underpinnings of Einstein’s General Relativity. Today, he works with Dr. Eugenio Bianchi researching semi-classical gravity in both an inflationary and pre-inflationary regime. Starting with an action due to Starobinsky with no matter field, they hope to identify the natural pre-inflationary initial conditions that predict the correct values for the fluctuations in the Cosmic Microwave Background, as well as discover new effects that arise from the pre-inflationary evolution of the universe. He maintains also a keen interest in both Loop Quantum Gravity and Loop Quantum Cosmology, and looks forward to researching future projects in these areas with his IGC colleagues. View all posts by Miguel Fernandez

Mónica is a current Physics graduate student at Penn State, she works under the supervision of Prof. Eugenio Bianchi on Loop Quantum Gravity and Loop Quantum Cosmology. Before joining the Institute for Gravitation and the Cosmos at Penn State, she obtained her BSc from the Universidad Nacional de Colombia and a MSc from the Perimeter Institute for Theoretical Physics and University of Waterloo. In her spare time, Mónica enjoys dancing latin american music, drawing and playing the electric guitar. View all posts by Monica Rincon-Ramirez

Randi is the holy spirit of the Institute for Gravitation & the Cosmos. As administrative coordinator of the institute, she provides stability and guidance to the regularly changing members of the institute. She has been a fond supporter of this blog. View all posts by Randi Neshteruk

Sydney Chamberlin is a postdoctoral researcher in the IGC. As a member of both the LIGO Scientific Collaboration and the NANOGrav Collaboration, she has broad interests in gravitational-wave physics and astronomy. Her current work at Penn State focuses on developing computational strategies to mitigate unwanted noise in the LIGO detectors. She also contributes to current LIGO searches for gravitational waves produced in the coalescence of compact binary objects. As a graduate student at the University of Wisconsin-Milwaukee (UWM), her LIGO work focused on the development of computational search tools for burst sources of gravitational waves. While at UWM, she participated in searches for stochastic backgrounds of gravitational waves using pulsar timing arrays (PTA). She also investigated the possibility of using PTAs to search for non-tensorial (i.e., non-Einsteinian) gravitational waves. When she is not doing physics, she enjoys cycling, triathlon, sewing, and spending time outdoors. View all posts by Sydney Chamberlin

The Institute for Gravitation & the Cosmos (IGC) at Penn State is proud to present its diverse research areas to everybody who is interested in fundamental science. The blog articles are written by graduate students and postdocs to give a comprehensive perspective on the institute's research.